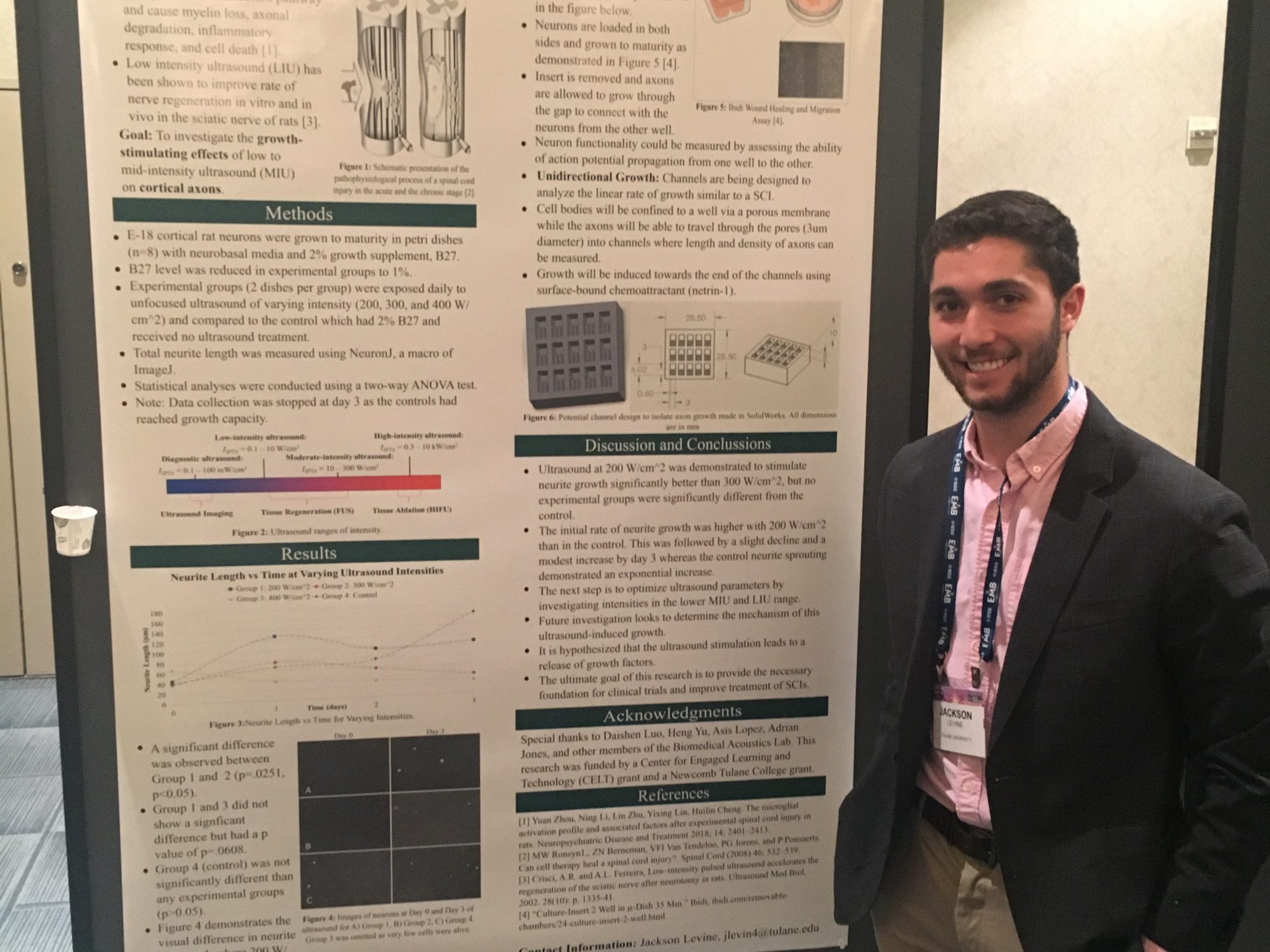 This conference was a great opportunity for me to present my research in a professional setting. The funds granted to me were used to purchase plane tickets and a hotel room for the nights I was in San Francisco for the IEEE EMBS Neural Engineering Conference. This is an international conference that occurs every two years to show off the recent developments in neurotechnologies. This year, the main topic was implantable devices. The conference ran from Wednesday through Saturday. On Wednesday, attendees arrived, and the only events were an opening statement from the committee putting on the conference. I unfortunately only caught the end of this but was able to attend the reception following the talk. Here, we were provided a meal and given the opportunity to network with and meet the other attendees. As the lone representative from Tulane, I knew no one attending the conference. This was the first conference I have ever attended as a researcher, so it was very intimidating to try and talk to people who were obviously in larger groups and that had significantly more research experience than I had. The attendees were primarily Ph.D. candidates, post-doctoral students, and professors. I met no undergraduates and received surprised and impressed responses when people found out I was an undergraduate. The main connection I made at the reception was with a group of researchers from the University of Tübingen in Germany. This group was doing research relatively similar to mine in the field of paralysis recovery and one of the Ph.D. candidates was actually using ultrasound for a different application. I ended up becoming relatively good friends with a few of the members and exchanged information to stay in touch. They actually gave me some great advice and asked really great questions about my research which have been utilized to better direct my current research.

The next two days included many talks by extremely impressive leaders in the field of neural engineering. Projects ranged from the development of better devices to measure brain activity to improved methods and technology for integration of prosthetic limbs to the nervous system. Working on the latter is my dream as a neural engineer, and hearing the developments just reignited my passion. In addition to the talks, there were booths for various companies and organizations related to neural engineering, but they were primarily geared towards Ph.D. students. However, in my tour of the booths, I saw the Brain Center was present. The Brain Center is an organization which works with University of Houston and University of Arizona to further our understanding of the brain. Coincidentally, I had recently applied to the University of Houston’s Research Experience for Undergraduates (REU) on Neurotechnologies to Move, Heal, and Feel Again. This REU was perfectly aligned with my interests, so I had to speak with the representatives. I was incredibly fortunate that one of the representatives was the head of the REU program to which I applied. He told me to send him an email and he would personally flag my application. I can’t say that it was just because I spoke to the head of the program, but I am proud to say that I will be taking part in this REU this summer.

I presented my research in poster format on Friday. I discussed the scope, the purpose, our methods, and our current results. I had an early encounter where I was given very difficult questions and criticisms, which I answered well. After that encounter, my confidence was high and everyone who I spoke to seemed interested in the work and in the potential of the project as it is very foundational at this point. I made a couple of contacts during my presentations, namely a professor from Stanford who was really interested and suggested a collaboration. We have yet to collaborate, but I hope to get good results in the fall and share them with her. Overall, this was an incredible experience and I am thankful that NTC funded this opportunity.