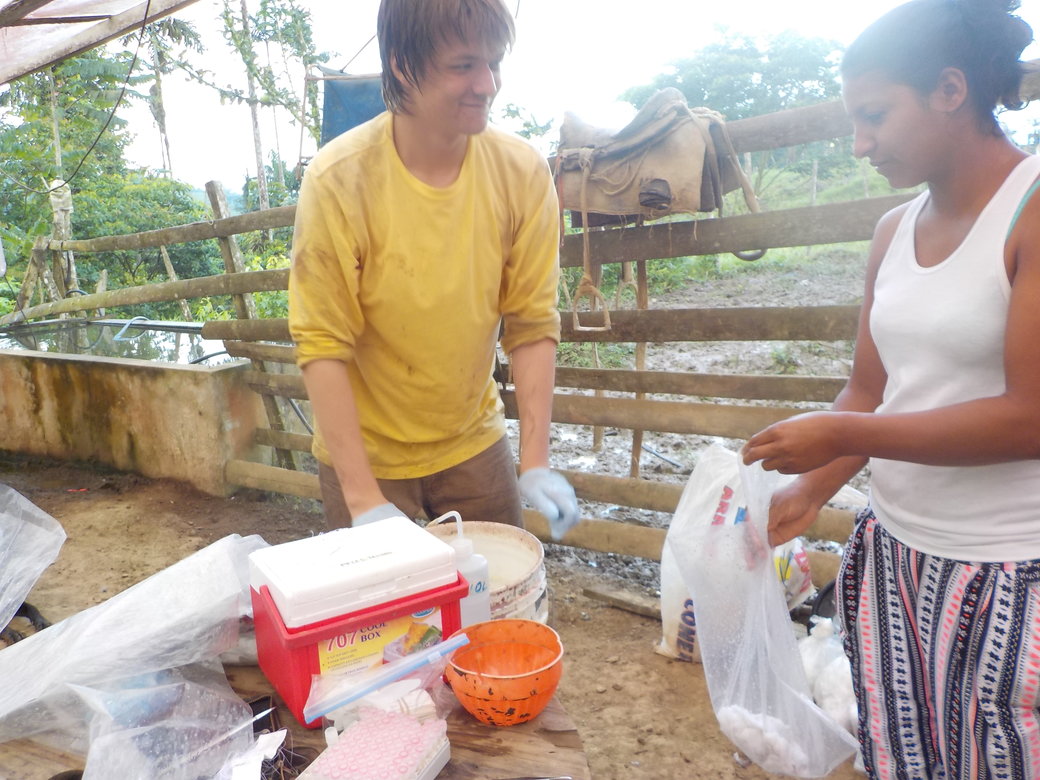 The Taylor Travel Grant allowed me to explore the streams of northwest Ecuador over the summer. I flew from Lafayette, Louisiana to Quito, a journey that took about 15 hours. I checked into Hostel Pousada del Maple, an extremely friendly establishment where they encouraged my efforts to speak Spanish. The next day early in morning I met with with Dr. Ramiro Barriga, the foremost ichthyologist in the country. He and his students were helpful and patient even though I was functionally mute. We discussed the scope of the progress and my question: how do deforestation and fragmentation of forest affect the fish biota of forest streams? I was planning on surveying an area of the country that had not been previously sampled, and Dr. Barriga was excited to get new data.

After staying in Quito for a week, and ironing out the parameters of the project, I met with Jorge Olivo in Quininde. Jorge works with Dr. Jordan Karubian as part of the Foundation for the Conservation of the Tropical Andes (FCAT). Dr. Karubian was my main collaborator on this project, and I had many conversations with Jorge, Dr. Barriga, and Dr. Karubian throughout the survey. Jorge helped me to organize my permits and the Ministry of the Environment, and I went to stay with his son Alfredo’s family in the Bilsa Biological Preserve. Bilsa is one of the most untouched blocks of nature in the world, and I consider myself privileged just to have set foot in it.

We began sampling streams the second day I was there. For the first week, Jorge and Kaushik Narasimhan, a new phD student at Tulane, joined me in the field. I also paid David, a neighbor of Alfredo’s to help us out for a couple of weeks. Once or twice Alfredo’s family even joined us. However, most of the time it was just Alfredo and me. We sampled six 20-meter segments in three streams within the preserve. We sampled an additional three segments per stream outside of the preserve, in forests that had been cut and fragmented. We sample each site twice, and identified all fish caught as morphospecies. We took species of each fish that could be visually identified as different and took genetic samples in each area. All genetic samples were preserved in ethanol and all fish were preserved in formalin. We used a large array of tools from all over the world to catch these fish. We used one seine net from Lafayette and one from New Orleans to catch fish. We used a castnet from a town nearby to catch fish in deep water. Additionally, the streams were very rocky with many places for fish to hide, so we used an electrofisher from Poland to shock them from cover and stun them to capture. We sampled for a month non-stop and caught over 600 specimens.

Jorge and I got caught up on the way back to Quito, trying to organize permits. However, they resolved after three days and I was finally able to return. Upon my return, Dr. Barriga and his students noted that my Spanish had vastly improved, most likely due to the fact that no one in Bilsa spoke any English. We identified the species there quickly, as Barriga left for the field three days after I returned. I left for New Orleans shortly after and ran preliminary analysis on the stream communities I observed. The most significant result of this analysis was a clear increased density of fish in forests that had been deforested or fragmented. This density is most likely due to the decreased canopy cover and increased sunlight increases the temperature of the stream, and thus increases the plants that can grow there. However, this can mean that there are chemical imbalances downstream and that deforested segments in general have a tendency to become homogenized. Further study is needed to conclude the effects of deforestation over the whole continuum.

This study was the greatest experience of my life. I was completely isolated, and only able to contact Dr. Karubian after riding a mile by mule. I saw umbrella birds and coral snakes and showered using a bucket and an outdoor water tank. I was challenged, spoke a language I never thought I could, dealt with parts of the scientific process I hadn’t before, and I learned so much. I want to thank Newcomb-Tulane College grants for allowing me to pursue this amazing opportunity.