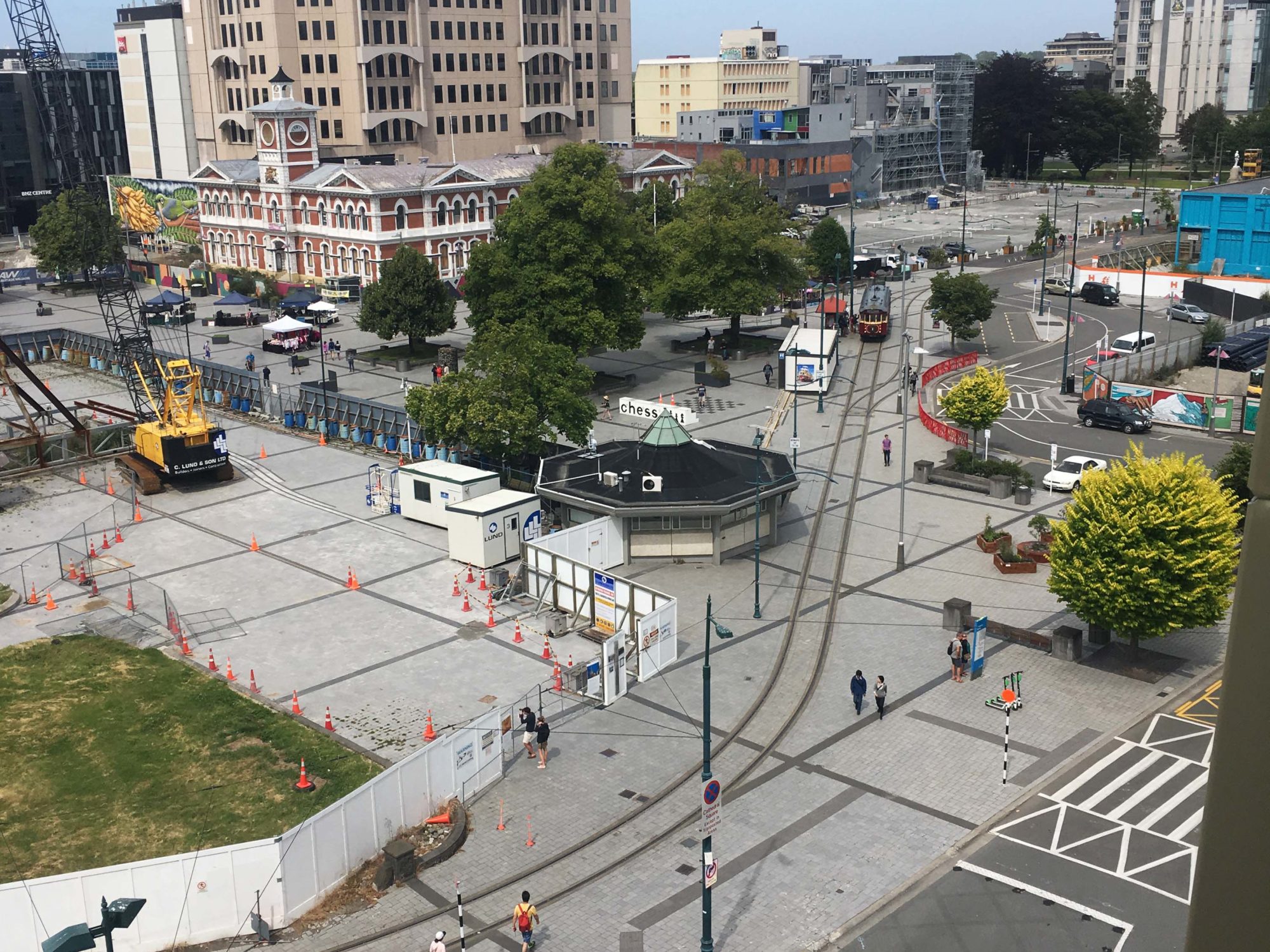 I used Newcomb-Tulane College travel grant funding to perform research in the city of Christchurch, New Zealand regarding the use of temporary architecture and urbanism as a means of disaster recovery and resilience-building. The grant money was used for travel to Christchurch and to relevant sites in the Canterbury region, as well as for lodging in the city in January of 2019 and for admission to several exhibitions addressing the post-earthquake rebuild process and the city’s transformation.

To contextualize this: in 2011, the coastal city of Christchurch and surrounds were devastated by a series of earthquakes and aftershocks that completely flattened most of the historic center and ruined thousands of homes. While much of the damage and empty space remains, a rare partnership of nonprofits, activists, and government task forces have come together to creatively reframe the problem of urban vacancy and ruin, incorporating the reuse of these spaces into the character of the city. Suddenly a hub for street art and design, Christchurch turned genuine crisis into an opportunity to radically reinvent a declining post-industrial city into a place centered around urban play.

While in the city, I traveled to as many pop-ups and temporary interventions as I could. I also met with several local artists and activists doing work around the revitalization of the city. I was particularly excited by the opportunity to learn from the work of the design nonprofit “Gap Filler”, who are credited with much of the radical reinvention of the city. Once in Christchurch, a critical point that came up as a part of their work was the importance of language in problem identification. For example: in New Orleans, coded words like “blight” are often used to refer to vacant properties. Weighty phrases, they require systemic solutions and carry bias. In Christchurch, however, Gap Filler chose to focus first on restoring a sense of life to the city through temporary solutions, choosing the simple term “gap” to refer to places where a structure once stood. Suddenly, the problem was simple – we have a gap, now we just have to find something to fill it with.

While of course not a solution to deeper urban and socioeconomic issues in the city, the act of creatively filling gaps has become a coming-together point for residents of Christchurch of all walks of life. While visiting intervention sites, I had the opportunity to see how groups like Gap Filler, Life in Vacant Spaces, and Greening the Rubble work closely to this day with residents – increasingly, those outside of the core – to create genuinely fun interventions in vacant lots, such as scooter parks, climbing structures, and book exchanges. There are now so many interventions that brightly colored “gap maps” have been planted around the city to show the locations of current projects, creating a playful treasure map of sorts to locate hidden places in the city.

This type of approach was particularly interesting in comparison to other cities that have recently experienced high degrees of vacancy. Typically, what comes to mind are ruin bars in Budapest or Bratislava, or the warehouse techno scene in Detroit and Berlin – a turn to secreted-away nightlife and “adult” counterculture as a means of making use of vacated neighborhood spaces. However, in Christchurch, the use of vacant space is decidedly and specifically family-friendly. By putting the culture of pop-ups in the public eye, play and recreation (particularly of the informal variety) has been placed back at the center of city life.

Perhaps more importantly, I got to see how these sorts of “temporary urbanism” strategies have been effective as a means of permanently restoring much of the central city. While many vast empty spaces still exist, mostly in the form of semi-paved lots or mowed grassy areas, development and reinvestment has followed where temporary projects lead. Drawing on the changing attitudes of city residents, many of the most significant redevelopment projects have been public common spaces: playgrounds, parks, and plazas that reinforce outdoor social life in the core of the city.

Examples that I visited were the elegant Tūranga public library, completed in 2018 by renowned architecture firm Schmidt Hammer Lassen, and the “Cardboard Cathedral” by Shigeru Ban. Interestingly, these were constructed in the city center where popular Gap Filler projects once stood. Now, the remaining “gaps” around the library and Cathedral– while still de facto gravel parking lots – are host to a shifting variety of pop-up activities, from moving dance floors to colorful art installations that bring hundreds of families to the area. These create a central hub, based around the shared space between public resources and temporary urban interventions.

As a graduating architecture student as well as a design thinking fellow at the Taylor Center, I’m particularly interested in the role of design in “resilience”: the ability to bounce back after crisis. From this research opportunity, a crucial take-away was that urban resilience requires both effective planning and social connectivity. In Christchurch, temporary design was first used to rebuild the city’s social environment, which in turn led to reinvestment in the city’s infrastructure and improved planning. So, sense of pride and richness of social culture in a place can be reinforced through design – and can be nearly as important as the design of a place itself. 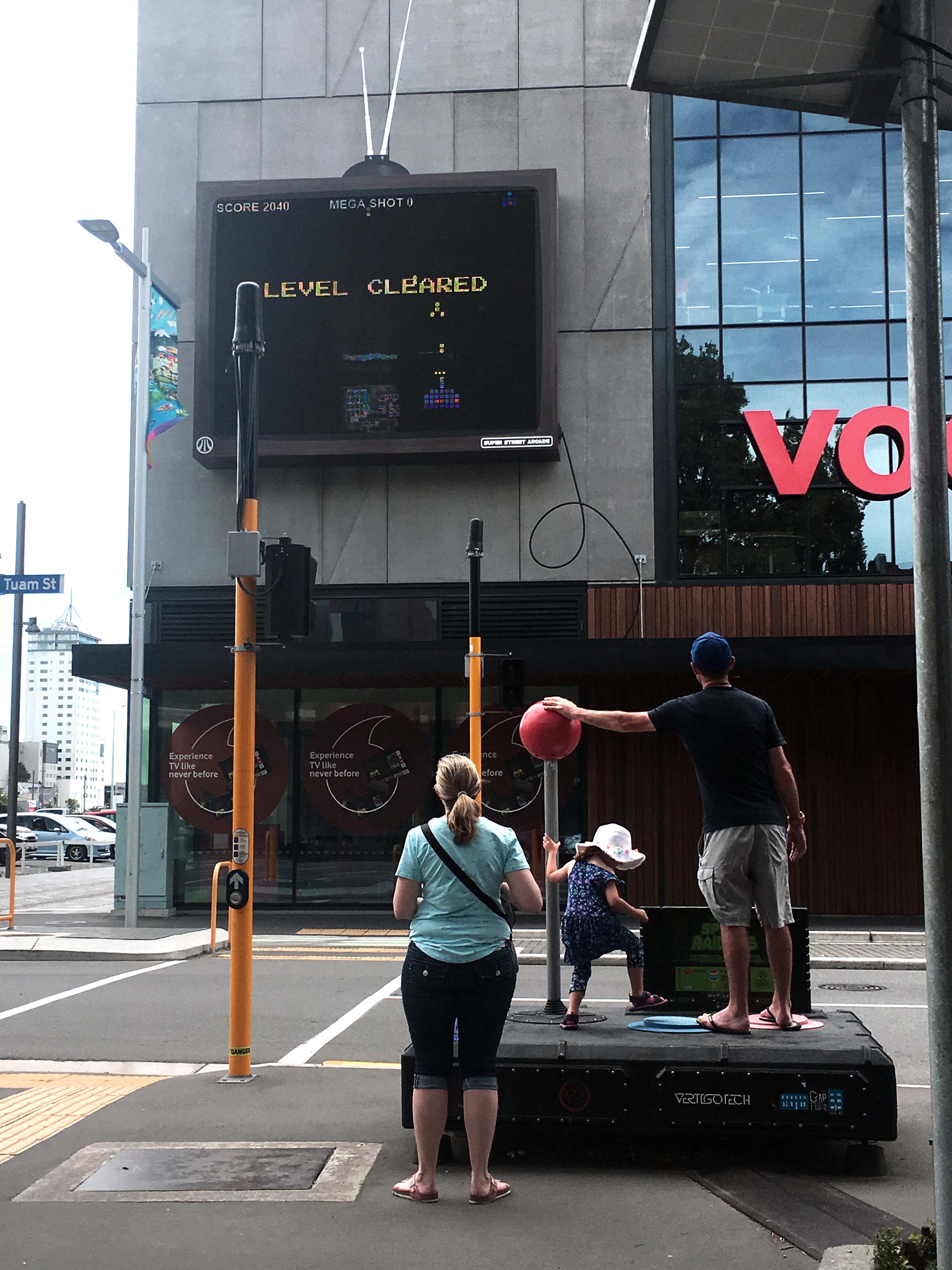